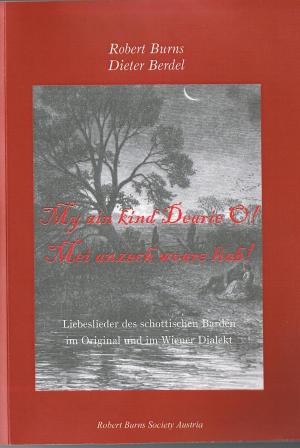 Last night we celebrated Robert Burns 251st birthday at the Kulturgasthaus Vorstadt and a moving and fun event it was. The place was packed and there were even a few kilts and tartans. This was the 10th time that Austria’s Robert Burns Society staged the event. (Pix of the event will be up on the Societ’s website soon.)

First came the bagpipes and a welcome – whisky nips and RB chocolate were handed out at the door. Then Dieter Berdel, who translated Burns’ words into Wienerisch, the dialect of Vienna, read a Burns’ piece in memory of Bob Hewis, an active participant who passed away almost a year ago now. Then came the music: the jazzy Jim Mullen Organ Trio to get us into the mood for Part 1: romantic and frivolous pieces in Wienerisch brought to life by Mercedes Echerer, Lena Rohstein, Gabriele Schuchter, Ursula Strauss and Alexander Strobele under the direction of Karl Menrad.

After the break we were served the traditional “Address to a Haggis” by Colin Munro in Scottish dialect and plates of the beast were passed around. (I thought it was yummy – a bit like a pale spicy Blunzn – the local black pudding.) More funky jazz led up to the naughtier renderings of the bard’s work, but they may have been saucier in the Wienerisch than in the original Scottish. The super evening wound up with us all singing “Auld Lang Syne” in Scots and in Wienerisch. Echt leiwand!