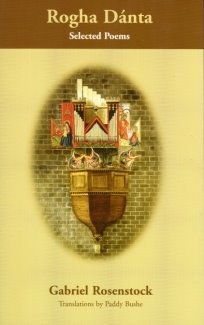 Irish poet, Gabriel Rosenstock, read from his work at the Alte Schmiede on Monday night.

The workshop at the Mariahilferstrasse premises of the Schule fuer Dichtung was small and intense. Tuesday and Wednesday were spent getting to know what it was all about – even for those already familiar with haiku. I learnt that I can’t grab the haiku moment; the haiku moment has to grab me. Disappear is what I have to do; unadorned, what the text has to be. An extract from one of Gabriel’s manuscripts may be found here.

On May Day, we went on a ginko stroll through Schoenbrunn followed by a kukei in the Gloriette Cafe where we shared our haiku and received guidance. Some pix of the day and the next are here and here.

On Friday we tried writing more haiku. It’s a difficult discipline for me since it means burning all that old furniture in my mind. Our reward was a ride through Vienna in a fiaker and on to some wine in a typical Viennese cafe with last farewells to the master at the open mic at Cafe Kafka.