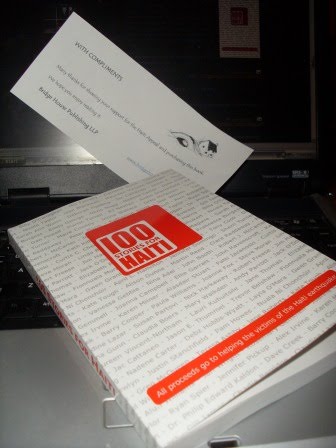 The last weeks have flown, so I’ll try and back pedal, but no guarantees. Just after my copy of 100 Stories for Haiti

arrived, work took me to Oxford and I was lucky to catch Nick

Harkaway and C.K. Stead in Harry Potter land at the Sunday Times Literary Festival. Nick has a story in 100 Stories for Haiti and wrote the intro; and Nick autographed my copy of his book, The Gone-Away World.
CK Stead, went on to win the ST Short Story Competition the following week, read from his winning story and when talking about writing stories said some things I’ve always believed – yes, Dorothy, you can break the rules. It just has to work.

Then it was off to London for an inspiring business lunch with the inimitable Mitzi Szereto, plotting books and just plotting and then wandering round the nearby market just down from the Hind, the golden one. We smelled truffles and ate oysters – the chap serving them must have thought we’d clean him out.

It was a great swoosh – just a pity that there’s no wifi at Gatwick.