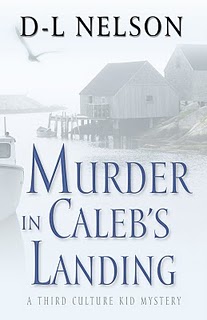 My Domino Theory on D-L Nelson

When I was in Geneva I used to meet my writing mate, DL, several times a week to talk plot over lunch. DL had several novels in the works and I had stories “out there”. We were reading each other’s work, offering suggestions and collecting rejections like nobody’s business. Then we started seeing our work in print. Elation! But that didn’t stop the flow of rejections. We’d sit in the conference centre, our work spread out on a table and brainstorm about the best way of killing off character X. Needless to say, we got very strange looks from the passing conference delegates.

I used to say to DL that her novels were like flying dominos: one would take off and the others would follow. Now, ten years later, my theory holds. Chickpea Love, Not a Cookbook (2003) was followed by The Card (2005). Then came Running from the Puppetmaster (2008),with that Mr X mentioned above, and Family Value (2010). Murder in Caleb’s Landing (A Third Culture Kid Mystery) is due out this autumn, and apart from more novels in the works and nearing completion, others are doing the rounds. But let me raise my glass, now: Good on ya, mate! and keep keeping at it!

One thought on “My Domino Theory on D-L Nelson”