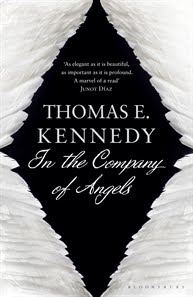 Thomas E. Kennedy´s book to be released soon in Oz

Thomas E. Kennedy´s In The Company of Angels will be released in Australia in August. I´m really pleased for him. He is a great writer, too long neglected as Publisher´s Weekly admits. See the post at Absinthe Minded.

Tom is also a terrific teacher and I´ve had the pleasure of attending workshops he runs at the Geneva Writers´Conferences and have been the recipient of much of his generosity as a writer and a teacher.

Why now the breakthrough and why not before? Maybe it´s the expat thing, doing things your own way, for the love of what you feel is best for you and your writing? Who knows? But when Tom´s essay, “I am Joe´s Prostate“, won the 2008 Ellie Award, people looked up. The rest is History. Bloomsbury took on In the Company of Angels and published it simultaneously in the UK and the US. And in August it will be released in Australia.

The lesson I guess is to do what you have to do, write what you need to, honour the craft, do the best you can and keep writing. Bravo, Tom!