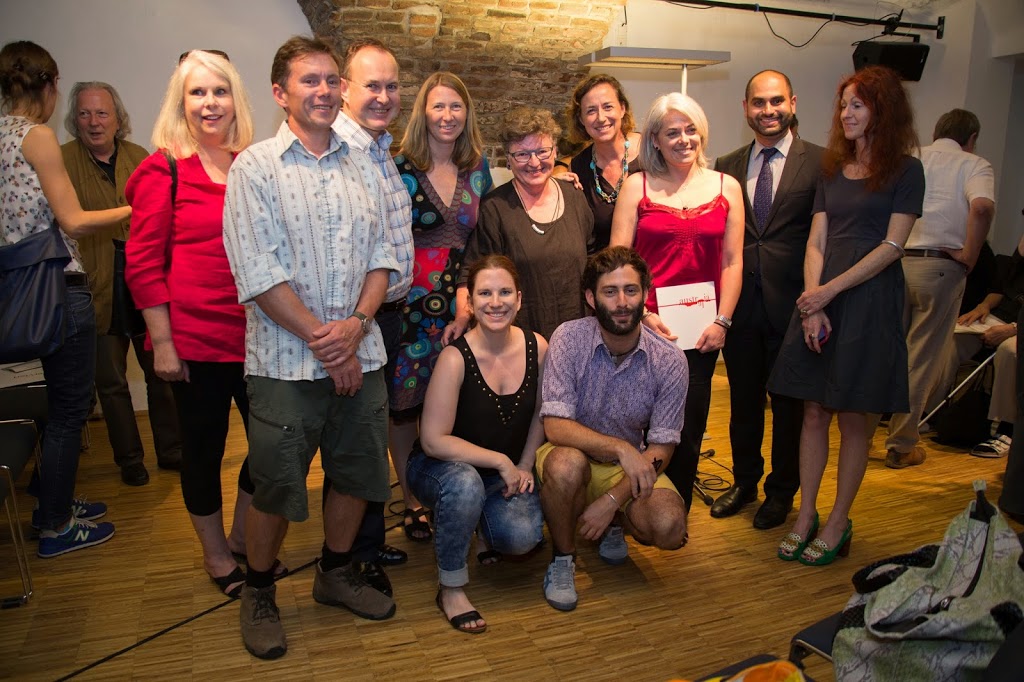 The Vienna Conference – for the love of story

26/07/201414/11/2014
The 13th International Conference on the Short Story in English is now over. It was held in the Juridicum in Vienna and welcomed writers and scholars from 38 countries. So many readings, so many papers, all on at the same time it was impossible for one person to cover it all. So here are some very different takes on the conference from the blogs of participants, as well as links to coverage by the local and national media in Austria:
ORF (Austrian National TV and Radio) in German, here, here and here.
Thanks are due to wonderful long-time Programme Director, Dr Susan Lohafer for her skill and sensitivity in establishing a programme that attracted interest from scholars, writers and the press. I also thank Dr Maurice A. Lee, Permanent Director of the Conferences, for having allowed me to, as he called it, “hijack” the conference to Vienna.

The Danube offered a safe and clement harbour as attested in the blogs by writers Elizabeth Baines, Vanessa Gebbie, Nuala Ni Chonchuir, Valerie Sirr, Madeleine D’Arcy, Pat Jourdan and scholars and writers Paula McGrath and Lisa Smithies, the latter with separate posts from day 0 to 5, and the mysterious GeezerInHat.

People found different gems in the conference because you couldn´t hear and see all that you wanted to since there were eight parallel sessions each day, so I´ll be adding blog posts about the conference experience as they come in, for example, from Alison Lock, Catherine McNamara, Anna Solding…

A photo album of shots of the event proper and a lot of things that were going on as well may now be found here. More photos on Facebook from the media set of the London Short Story Festival may be seen here and here and here.
As Co-Director of the Conference, I was proud to have been able to bring the 13th International Conference on the Short Story in English to Vienna.  And it was a resounding success, thanks to the many exciting papers and discussions, the wonderful readings and the synergy that prevailed, the atmosphere of nurturing and support, curiosity and passion of all the participants, as well as to the support of all kinds offered by the city of Vienna, its residents (writers, participants, family and friends), literary organisations and associations, several embassies, local media, and the University of Vienna, and even some from outside the city, as well as the participants through their registration fees and donations.
Facebook and Twitter were abuzz with comments praising the stories of writers, and many writers attended the panels where scholars delivered papers on the genre, which through their cutting-edge nature attracted the media relating to cultural affairs. The conference booklet contained the abstracts and a call for the final papers will be forthcoming.
The job of Co-Director, was supported by a wonderful team of volunteers, who contributed to making exhausting work also rewarding. Unfortunately, I was able to enjoy very few of the amazing readings and discussions, and papers purely because there was a job that had to be done.
But a high point for me, as a writer and resident of Vienna, was the kick-off public reading on 14 July in the Alte Schmiede, the premier venue for literary readings. It was a bilingual event with readings by the Australian writers Cate Kennedy and Andy Kissane, and the Austrian writers, Friederike Mayröcker, Günther Kaip and Doron Rabinovici, all writers who had contributed to the German-language anthology Austr(al)ia which was launched at the reading.
The Australian Embassy gave support to the event and Ambassador Stuart provided words for the back cover of the anthology. I am particularly grateful to the Austrian writers who dared to come on this adventure with me, for it was an adventure. At the conference itself, they all – the  above-mentioned Austrian writers and Bernhard Strobel (who also read in English at a public reading at Literaturhaus together with Bharati Mukherjee and Robert Olen Butler) and Judith Nika Pfeifer – had to present in English at the conference.
I am also grateful to the Australian writers Rebekah Clarkson, Cameron Raynes and Catherine McNamara for their stories in German translation in the anthology, and for arriving in Vienna a day earlier to be at the launch. Thanks are also due to Ka Ruhdorfer for the German translations of the Australian stories.
I am particularly indebted to Friederike Mayröckerfor having agreed to participate in both the reading at the Alte Schmiede (where she read work just completed two days before) and in the plenary on Austrian Literature, and for having contributed work to Austr(al)ia and, in English translation by Liselotte Pope-Hofmann, to the conference anthology, Unbraiding the Short Story, which also contains English translations by Hillary Keel and Ida Cerne of the stories in German to help make up a global anthology of 79 short stories by participating writers.
This conference was very important for me in several ways. It marked a turning point in many respects – for the appreciation of Austrian writers by a new international readership, and for the inclusion of new and exciting insights on the short story from participants many of whom had come to the conferences and to Vienna for the very first time. It also brought the writings of  a diversity of English-language writers before an international audience and a curious local population through the readings open to the public and the workshops on 15 July.
Through its international reach and by taking place in another city each time, the conferences have a tradition of bringing the works of  emerging and better-known writers to a wider readership, and so I am happy to see local writers included, especially since this was the first time the conference took place in the German-speaking world and in a country where a distinction is made between the short story and a form tending towards the prose poem and the “proëme” of a Mayröcker. Whatever form, be it traditional or tending elsewhere and elsehow – the rise of flash fiction being just one manifestation –  the variety shows the many-facetted side of story. Oh, and do read this interview with Cate Kennedy on unbraiding the short story in World Literature Today.
Scholars, too, from more than 20 countries were able to present their papers not just to other scholars, but to writers as well, which will no doubt have shown the birds how the ornithologists view them. (The bird/ornithologist relation was coined a while back by Robert Olen Butler to describe the specific nature of these conferences.) In Vienna they were all flying.
For me personally, the conference will always be linked to the memory of my Swedish brother, Anton Martin, who took all the photos for the website and intended to take the official photos for the conference pro bono. We bad Toni farewell on 11 July, but he was by my side throughout the conference.

2 thoughts on “The Vienna Conference – for the love of story”