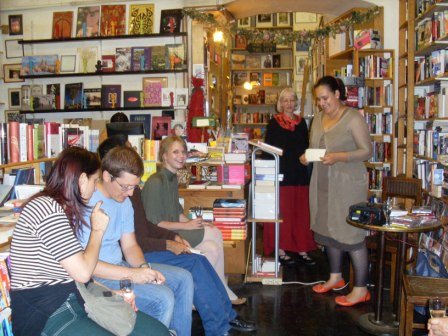 Last night Ruby Sircar gave a talk at Shakespeare & Company related to her book, Liquid Homelands. The book is based on her PhD thesis and deals with the sonic productions of second generation (South) Asian women. Ruby not only spoke and answered questions, but also played music by female performers she had studied. Having had problems in understanding let alone accepting postcolonial theories of the subaltern, I was interested to hear the views of a representative of the “second generation” and found that I could well relate to the closing words of Ruby’s book where roots are seen as migrancy based rather than as parental-homeland based and thus not as post-colonial. “They are no longer at the margin, nor are they stuck >in

between<. They are migrancy-bound and therefore liquid. Their identity is based on movement."

For me this recalls the “recurring alternating superpositions” coined by Sophie Elias-Varotsis at a recent Conference in Finland, but it also makes me think that the homeland may not be a place at all, but a state of mind, the place where one creates, that room of one’s own. There the writer/artist/whatever feels at one with the activity – but others cannot see things this way and thus proclaim the need to affix labels of nationality, gender, and genre if for nothing else than a place, not in the sun but, on the shelf.

One thought on “Liquid Homelands”