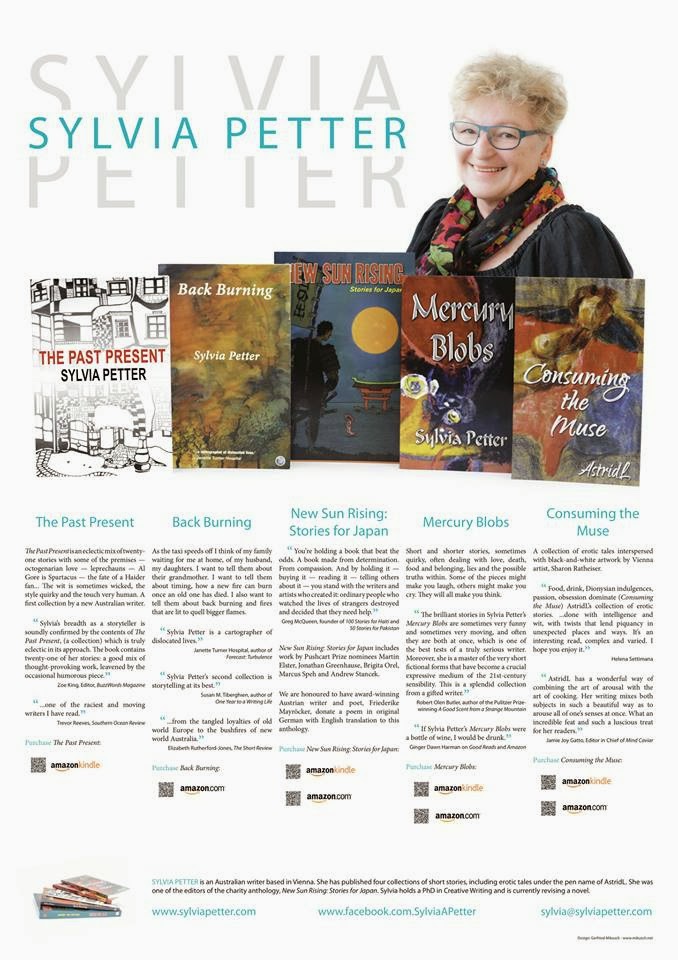 13/10/201321/09/2014
Here are some of my motivations, what happened in Frankfurt, and things I learned. Since I live in Vienna, it wasn’t far to go and if I booked early enough I could get a cheap flight. Hotels are impossible, so I settled for a bed through AirBnB about 30 minutes from the Fair by direct bus. Free transport in Frankfurt was included in my ticket. I wanted to go during the week and not on the days open to the public since I wanted to do three things: promote the 13th International Conference on the Short Story to be held in Vienna in 2014, and meet some of the publishers of authors attending to make contact to facilitate getting author books to the conference on time; try and get my own books out there; and try and get some exposure for the French books of a former colleague from my Geneva days, now an independent publisher. I didn’t want to be a nomad and so needed a stand.
I’d seen some advertising by Irina Dunn, the former Director of the NSW Writers’ Centre, whom I’d meet on my visits to Sydney and who had been good to me with tips and info – I had received a mentorship in the late nineties to work on an early draft of my novel with Carl Harrison Ford through the Centre. Irina had recommended Irina and William Webster of the Australian Selfpublishing Group, and although not selfpublished, they let me in because of my being Australian. My daughter in Sydney lent me the fee, and things got rolling.

GerfriedMikusch in Vienna made me a wonderful poster for the stand and some great flyers. I downloaded Publishing Perspectives’ Author Guide to the FrankfurtBook Fair, got some mini cards printed via Moo, took 3 days off, and left for Frankfurt on Wednesday, 9 October, not really knowing what I was in for.
I was to discover that Frankfurt is really no place for authors unless you were one your publisher was promoting with readings and signings, but … I had not one, but a bunch of missions. My books were taken care of at the ASPG stand, where I could come back to sit down, leave my bag, unwind and take off again.
Shoes, The importance of good and comfortable shoes and a box of bandaids. Frankfurt is huge! Luckily, on day 2, I discovered the shuttle service between the 9 halls.
Then Murphy’s Law struck. I’d taken my hubby’s phone charger instead of mine, so was soon to run out of juice. My old notebook couldn’t handle the free wifi, so it ended up staying in my rented room on the other side of town. But there were kiosks for checking my email in the Client Area, and it was a nice change to be phoneless and interact physically. And on day 3, my beautiful poster disappeared from the stand. I like to think someone wanted me and my books around, so I hope that whoever took it will be very happy and maybe run their devices over my bar codes.
Enter serendipity. And this is nothing for wallflowers. You just have to speak to anyone you meet – you never know. A great believer in the wild card and naturally bloody minded, I just did my thing. Met some great people at happy hour on the UK and Australia Stands, made contacts, drank Guinness to music at the Irish Stand, good wine and wonderful canapes at the New Zealand Stand. These happy hours were where my most valuable contacts were made. And it was there that I met Australian author, James Lane, based in Berlin, and attending the Fair just to find out what it was all about. It gives you a great insight into the industry, which we both agreed.
Many events are costly to attend because they are targeted at the trade. But Publishing Perspectives ran a great stage with lots of free and great discussions – here’s the list.
A message that came across was the value of content, content, content. Another was that publishers were interested in indy sales – 2,000 was good, 5,000 better, or prizes. Some saw the future of the self-publishing/publishing divide shrinking to just one thing: publishing. There was a plethora of services to help authors publish and distribute, but it always came back to content. Another thing I noticed, or at least my feet did, was that the author has to get out there, interact, try new things.
So what did I get out of it all? More than once did I hear that to work in publishing was a luxury. These people love books, but the author may find that s/he’s calling the shots with publishers having to look after them, or else. Research on selfpublishing by Dr Alison Baverstock also showed that it wasn’t money that drove people to selfpublish, nor was it just control. It was fun and the enjoyment of the whole process. I’ll be getting reports on interest in my own books from ASPG shortly, although short stories are still a hard sell. I hope Alice Munro’s Nobel Prize win will elevate the short story to a genre to be reckoned with from here on in. And speaking of short story, I was able to get flyers about the conference out to interested people from all areas, geographical and otherwise, and even managed to sprinkle some fairy dust on prospective funders. Fingers are crossed.
And the mate’s books? Well he might get some interest from China. More fingers crossed.
Would I go again? No. This time next year the conference will be over, and my poor feet aren’t getting any younger. I’m a writer, and I need to write. But I’m grateful for the experience I had. I learned a lot, made lots of new contacts, and saw that publishing itself is a risk, something which despite the best preparation is subject to Murphy’s Law, and that wonderful presence of serendipity that can make things happen, provided all the groundwork has been done and provided the content is good. For, after all, it’s not for the author – once the book is done, it’s not ours anymore, it belongs to you, the reader. The publisher – traditional or self – is only there to get it before you. You, the readers, are the ones to whom we reach out, want to touch. In the meantime, and on the way to you, it’s a grand process, one to be savoured and enjoyed.