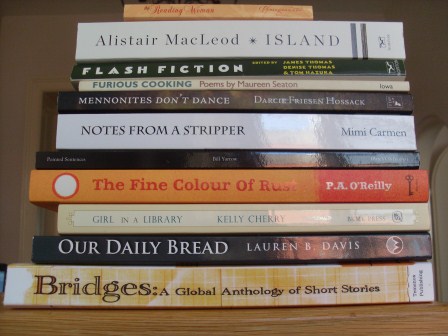 My back is aching from lugging almost 20kg back from North Little Rock, Arkansas. Yes, I know there are ebooks & co., but the ones I brought back had been waiting for me at my Boot Camp mate´s place in Connecticut and the others I got in North Little Rock at the 12th International Conference on the Short Story in English, and they had precious handwritten words inside them.

Boy, was it hot in Little Rock! It took me 20 hours to get in and 18 hours to get out – something to do with little Eagles and storms and fuel and rerouting and Chicago airport. But I wouldn´t have missed it. You can read other takes on the conference at Nuala Ní Chonchúir´s blog under Arkansas Days 1, 2, 3 and 4, and at Tania Hershman´s blog. Nuala´s latest collection, Mother America, is just out, as is
Tania´s My Mother Was an Upright Piano.

Nuala and Tania, and Sandra Jensen, and Robert Olen Butler, all graciously agreed to be on a panel I moderated on flash fiction. Thanks to their flashes and input and the wonderful audience, the panel became wonderfully organic and buzzed for the whole 90 minutes. I was so happy!  We were winging it to a certain extent, but then we were the birds and not the ornithologists. Robert Olen Butler – or was it conference director, Maurice Lee? –  once coined that comparison to explain how a conference with both writers and academics could be such an intense  and unified experience.

This was all on the Thursday. The little Eagle had made me miss my two workshops – one with Clark Blaise and another with Alistair MacLeod – so I was a bit disappointed and nervous, too, for in the morning of the panel I had my reading, introduced by Licia Canton,  with a prolific Canadian writer, Michael Mirolla, whom I´d met at the airport waiting for the shuttle that also introduced me to Tania Hershman. Anyway, I was scared. How in the hell was I going to fill 30 minutes with a disarray of ever diminishing flashes? Just do it! And it worked. Audience reaction gave me the needed blessing to pursue selfpublishing my next collection of stories.

I know I´m all over the place, but let´s go back to Wednesday night. We were offered a terrific reception at the William J. Clinton Presidential Library and Mr Clinton himself welcomed the conference via a big screen. When he asked us to leave our stories,  I did, donating a copy of Back Burning to the library, thanks to the help of the wonderful conference organiser, Hazel Hernandez.

There were many parallel sessions, so I couldn´t catch everything, but managed to catch a delightful reading on Wednesday by Tania Hershman, and a darker lyrical one by Sandra Jensen and a mesmerising one by Kelly Cherry, sandwiched in between mine and the flash fiction panel on the Thursday.

Then on the Friday I moderated a panel on experimentalism in postmodern fiction with presenters – ornithologists this time – Ryan O´Neill from the University of Newcastle,  on The Australian Short Story: Its History and Postmodern Present, Michelle Ryan-Sautour from the University of Angers, on Re-skinning the Self in Ali Smith´s The First Person and Other Stories, and Maria Salomé Osório from the University of Minho, on Fragments of Narrative: Lydia Davis´ short-short stories. Unexpectedly for me at the outset, this session fitted beautifully with the one on flash fiction the day before.

And then a luncheon with a reading by Clark Blaise from what will become a new collection of stories.

On the Friday night we were bussed out to the University of Central Arkansas Campus, where Maurice Lee is Dean, and had a great meal – we were fed so well in Little Rock – followed by readings by Moira Crone – from her new sci-fi novel, The Not Yet, which I found a bit scary, but I´m a bit of a chicken in that area – by Velma Pollard, who said this conference was like home – I´d had the same feeling just that morning –  by Bharati Mukherjee, and by Katherine Vaz.

On the Saturday there was an interesting panel on the Irish Short Story – is there really such a thing? – with panellists Mary Costello, Molly McCloskey, Mary Morrissy, Jamie O´Connell and Nuala Ní Chonchúir, kept in line by the inimitable Anne Luttrell. And that evening there was a reception with live jazz and a terrific meal followed by a reading by Alistair MacLeod, which his son, Alexander MacLeod introduced in a way that moved us all and had me wiping an eye. Alexander, a fine writer, knew all about Little Rock, which I found out on an evening outing with the Irish/Aussie/UK contingent where it was lovely to chat to his wonderful Dad.

The Conference was held in the hotel where we lived and so there were several happy occasions around the bar where I was able to drink real martinis and manhattans – they never get them right in Vienna – bloody mary, and wine. And the talk was always about story. It was lovely to catch up with Paddy O´Reilly and to meet Adnan Mahmutović who also has a story in New Sun Rising: Stories for Japan.

Yes, this conference is indeed my home. And that´s where I´ll go wherever it is in 2014.

And before I forget, here´s the anthology with new work by writers attending the conference.

ps. just so you can see what a great conference this continues to be every two years, here´s a little spoolback to the 11th in Toronto in 2010 and the 10th in Cork in 2008,